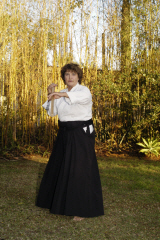 Are you a female searching martial arts in Brisbane? There are not many martial arts where females can be just as capable as males. But Aikido is one of them!

Size and physical strength count for nothing in this subtle Japanese defensive art. It is all about balance, movement and timing – all borne out of a highly developed non-fighting mind set.

Male joints are the same as female joint so joint locks are just effective regardless of who is immobilizing who. Because we all stand on two legs with feet pointing to the front, our balance is generally strong in one direction and weak in another.

Aikido throws are about taking balance, not pushing or dragging. The same principles apply to the taking of balance whether it is male or female. When someone is thrown it really is a case of the bigger they are the harder they fall. Fortunately we learn to roll safely out of it.

In the early stages of Aikido training it is easy to distinguish who is the attacker (Uke) and who is the defender (Nage). But with regular practice comes a highly developed sense of awareness and anticipation.

With more advanced skills, it becomes harder to distinguish Uke from Nage because Nage is moving to defend even as the thought to attack is forming in Ukes’ mind, and well before it is translated into action.

So does it mean this strictly defensive art transforms into an aggressive attacking art over time? No! It just means that defence occurs earlier in the eyes of an observer. In most cases, it also means that there is less to do because the initiative has been seized earlier.

We have many females train with us at Griffith Aikido Institute and I am pleased to say that we have quite a number of female senior students at both or North side and South side dojos. We deliberately position ourselves as a female friendly Aikido club.

Our most senior ranked female is Jutta. She is a grandmum and a 4th level black belt. She is a truly delightful person and a great teacher, but I wouldn’t mess with her.

So if you are a female looking for a truly engaging and interesting martial art in Brisbane and one that provides effective self defence, come meet Jutta, Gabby, Eri, Sylvie, Michelle, Narelle and our many other girls.

If you wish to join Everton Hills dojo, either call the main club number on the masthead above or call Rod direct on 0406 598 478

If you wish to join Nathan dojo, either call the main club number on the masthead above or call Steve direct on 0432 269 534 or simply pay online at http://www.griffithaikido.com/onlinepayment.html (Nathan only).