Blog - Latest News
You are here: Home1 / On the Importance of Breathing

In general, you will find at Griffith Aikido that in class, we perform breathing practices from time to time. It may seem strange to practice your breathing as this is something your body just does. As I’ll explain below and in later posts on the topic, breathing is an important subject to research in your own training and development. I would be even daring enough as to say that breathing plays an integra 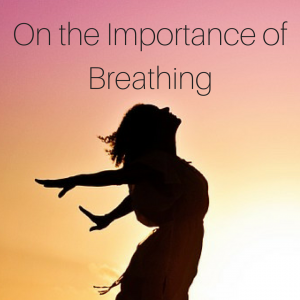 l part to not only martial arts but any movement in general.

So, now to prove the case for my bold assertion. Breathing is a subconscious mechanism. It is rarely given the conscious attention it deserves, as it happens automatically. As anyone would rightfully know, the body depends on oxygen to survive. Your body’s autopilot system cues the body to breathe, as without oxygen, the brain would eventually shut down and you would die. In our classes, we usually perform breathing training at the beginning, during or at the end of a lesson. It is somewhat necessary, in order to gain the mental and/or physical attributes of Aikido.

At the start of class, breathing is performed as a good way to ‘warm-up’ the body physically and mentally. Before placing the body under physical stress, the lungs need to be prepared and even trained to give greater or steady amounts of oxygen when the body physically or mentally demands it. Like finely tuning a car, working on your breathing will assist your performance greatly in any endeavour.

When you start up your car, it is generally good practice to leave it sitting in idle for a little time before driving. Doing so allows the engine to warm up and for fuel and oil to pump through the mechanics. Breathing is somewhat alike in that it allows us to stretch the lung sacks by expanding and deflating the lung tissues as well as pump oxygenated blood through the system.
Breathing also helps with that all important aikido principle of relaxing the body. Breathing additionally works as a form of meditation to sharpen one’s focus and concentration. By consciously focusing on inhaling and exhaling, like practicing a weapon’s kata, it gives our mind a simple set of movements to focus on. By focusing our concentration in such a manner, we can clear away all distractions to focus on the current task at hand. This in turn strengthens our level of concentration and focus before we engage in training that requires mental and physical rigour.

During high speed training, such as in taninzugake (where your partner/s repeatedly attack you in quick succession for a period of time), breathing practice assists in calming the mind during a highly stressful situation. When stressed, the body may not function properly. This is akin to pushing the accelerator pedal down so hard on a car, that the petrol intake chokes the piston and thus, your car does not go any faster or even function better.

In our martial situation, we are dealing with oxygen and adrenaline pumping into the body. The result being that you may breathe so quickly, that you cannot actually take in the oxygen and instead build up carbon dioxide. This is better known as hyperventilation. When under pressure, focusing on pacing the breathing by staying calm keeps the body working while dealing with the oncoming attackers. Moreover, reduced adrenaline allows our vision to not become narrowed and be aware, essentially, avoiding the flight or fight response mode.

Lastly, you may partake in breathing training at the end of the lesson as a way to mentally and physically “cool” the body down. This is achieved by the pace of breathing to slow down the heart rate of blood pumped through the body.

This is still only a very superficial description of breathing in aikido. I will in future discuss the basic body mechanics of breathing as well as the history of breathing through the lens of Japanese influence. Ranging from Japanese mythology and sword schools to the early 1900s craze of breathing practices in Japan, and then its influence in the early 20th century strongmen and weightlifters of today.

The Art of Aikido and What Helped to Shape It

Self Defence with Aikido
Scroll to top