The Aikido Journal is a source of rich history and valuable information about Aikido. Stanley Pranin is the Editor of the Aikido Journal and writes many brilliant articles found on the site http://www.aikidojournal.com

One of the many articles that I particularly like is titled “Cultivating a martial spirit”. 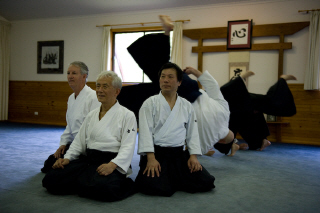 The article emphasizes the importance of training with martial focus and points out that etiquette is one of the cornerstones of proper dojo behaviour.

On etiquette, he writes, “The customs we observe before, during, and after training are designed to establish a controlled setting where dangerous techniques can be practiced safely. Etiquette should not be dismissed as an empty set of forms performed merely out of habit.”

On being Uke, Stanley Pranin explains the importance of Uke’s role in paired practice.

“It is important for uke to attack cleanly and with intent without anticipating nage’s response based on his foreknowledge. Nage needs a committed attack in order to understand matters of balance, body mechanics, and energy flow. Uke’s martial attitude will protect him from injury and promote his own progress and that of his training partners.”

On being Nage, he explains how Nage benefits in the long run from the ‘known attack’ method in paired practice.

“In the kata-like approach described above, nage knows the nature of the attack so he can concentrate on proper body displacement, distancing, and unbalancing his partner. The element of emotional stress that typically would accompany a real-life confrontation is largely absent in this basic training context. Nage’s initial movement should unbalance his partner because uke will be powerless to resist if he has lost his center of gravity.”

Stanley Pranin also answers the often asked question, “Why study aikido and not something of more immediate applicability to incidents of urban violence like the use of firearms or street fighting skills?”

I highly commend this article to you. To read the full article follow this link to the Aikido journal: http://www.aikidojournal.com/article?articleID=362