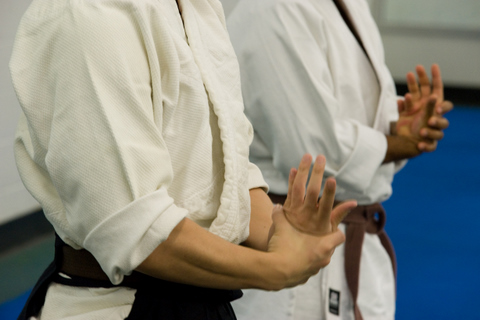 It was another grading of high quality last Saturday with 9 members demonstrating what they had learned. Tami and Rob were fantastic in their 6th kyu grading. Their pre grading practice was obvious as they showed us good hanmi changes, good entries and and correct footwork. Even better, they both stayed incredibly calm and very relaxed. Very well done!

Rodney did a great job on his 5th kyu grading demonstration. Rod is a 2-3 times a week regular and it shows. His technique was good, his centerline was upright, and he appeared very smooth and very relaxed in his techniques. A great job!

As a group, what to work on for next time? Never turn your back on your opponent.

Jason admitted to a few nerves coming into his 4th kyu grading, but it didn’t show and he just keeps getting better with each grading. For a tall guy he moves well and maintains a good upright centerline. He demonstrated all of his techniques very well and controlled Uke quite closely. Very impressive!

Danny was very purposeful and controlling. As always he was quite martial in his approach and kept weight underside very well.

Like all in this group, Ken has been training regularly and he continues to improve with each grading. His movement and technique was very good and for the most part appeared calm and composed throughout.

Kylie was calm and in control throughout but she started to tire a little towards the end of taninzugake. Impressively, she quickly brought her breathing under control and was very composed during her weapon kata.

Bartek appeared a lot calmer than usual throughout what was a very competent demonstration. He puts it all down to a couple of pre-grading pain killers for his troublesome back but I suspect some talent and a lot of practice also had a bit to do with it as well.

As a group, what to work on for next time? The basics will always hold you in good stead. Continue to relax and let Uke do the work. Slow down a little! Adding speed just to get through a technique quickly can expend energy and compromise form. If a technique is going to work it will work slowly and much better when you are relaxed.

Dean has come such a long way on his Aikido journey to date. Like a fine wine he continues to improve with age and experience. He is tall but keeps a very upright stance. How he managed to turn under Lachlan’s arm in Shihonage without stooping, I will never know. It was obvious that relaxation and economy of movement were the main goals for his 1st kyu grading; and he did it very well. Dean will now wear a hakama in the dojo and I can hardly wait for his shodan grading.

Congratulations to all who graded and thank you so much to all those who volunteered as Uke. 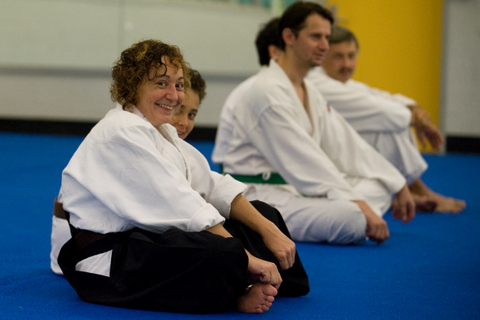 On Saturday, 17th September, Everton Hills Dojo will be holding Shodan Gradings for Darren Richardson and Ian Grant. Visiting Ukes are cordially invited for the occasion to support Darren and Ian.

The session will run from 10.30am -12.30pm and there will be a pizza lunch afterwards. I am currently talking to the PCYC Management about an extension of time and won’t have an answer till Wednesday. Should that not be possible all proceedings will have to be completed by 12.30.

Hoping to welcome many visitors!

“There never was a good war or a bad peace.” Benjamin Franklin