Blog - Latest News
You are here: Home1 / Where do life’s attacks come from? 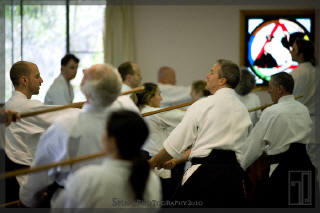 Comparing martial arts in Brisbane? Every now and again I read yet another article about martial art comparisons and which martial art is the most effective. Of particular irritation is the assertion that the non-confrontational arts like aikido are useless in a cage or on the street.

I have two points to make here. Firstly, cage fighting is a purely voluntary pursuit by professionals trying to make a living. It is irrelevant in real life. Secondly, as devastating as a street attack is, only a very small proportion of the Australian population will find themselves the victim of an unprovoked attack on the street.

After some years of Aikido training I have learned enough to know that as soon as there are more than two people attacking at once, there is no time to do anything other than dodge, blend, avoid and if possible – run! If weapons are involved then ‘not being there’ is by far the best, and possibly the only self defence option. Anything else is ego talk!

So where do most of the real life attacks come from?

There is a much greater likelihood of being in conflict with someone you know. For example, an argument with your partner, a confrontation with an ex-partner, a dispute with a family member, a falling out with a friend, conflict at work or harassment at school.

Every day as we go about our business, there is a reasonable chance of encountering an angry driver, a rude shop assistant or dissatisfied customer. Simply going out to a local restaurant for a meal could mean accidentally bumping someone, spilling a drink, or becoming the object of an intoxicated person’s misguided affection and goodwill.

The everyday difficult situation could occur anywhere – at work, at home, at school, on the roads, walking down the street, in a shopping centre, in a car park, or on a bike path.

Attacks don’t always come in the form of punches and kicks. A confronting situation could manifest itself as a difference of opinion, an argument, rudeness, shouting, abuse, derision, staring, silence, intimidation, verbal harassment or cyber bullying.

There may never be a push or a punch and still it can be a very scary experience. There may be no physical contact at all, but still you must be able to defend yourself.

Besides, if there has been no physical contact then you have no right to use physical or martial responses. So what do you do?

This is where people with a fighting mind and no self control run out of options!

Self defence is a lot more than just learning to fight or being able to fend off a random attack. It is about pushing ego aside and learning to cope assertively and peacefully with the other 99% of difficult situations that make up real life.

It is no accident that Aikido is known around the world as the ‘art of peace’. If you are looking at martial arts in Brisbane, Aikido is not only great self defence, it will also equip you for the challenges of real life.