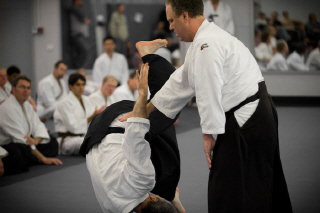 We have had quite a few people start and finish in our dojo in a short space of time because they were disappointed that they were not learning to fight.

It is true that Aikido takes a long time to learn and takes a lot of practice before it is effective as self defense. However, Aikido is founded in a different philosophy. Although it is a martial art but it is certainly not a fighting art. It is known world wide as the art of peace. It seeks to restore peace where peace is absent!

Fighting is society’s default conflict resolution process. Most people know no other way. Our entire history is enshrined in war and violent conflict. It was preached to me by my Father and it is now reinforced to our children in action movies and video games.

So why shouldn’t a school yard argument or a difference in core beliefs, be resolved in exactly the same way?

Come learn Aikido in Brisbane at Griffith Aikido and never be concerned about bullies again!

Come train with us and extend your network of Aikido friends. Class times information at https://www.griffithaikido.com.au/class-times/

Visitors welcome at Griffith AikidoWhat is aikido?
Scroll to top