All of that hard practice over recent weeks will be on show next Saturday at the Griffith Aikido grading day. Held at Nathan dojo, there will be a variety of coloured belt gradings plus several 1st kyu demonstrations. If you want to see Aikido in action come along next Saturday. Adult gradings start at the usual class time of 10.30am. Members please bring a plate to contribute to the post grading celebration. If you are unsure what to bring, please ask Narelle at the front desk.

2. Aikido is more than physical technique

Technique is for the dojo. Aikido is for life! 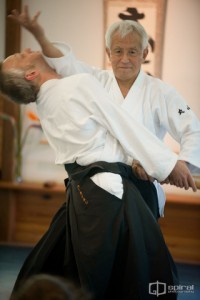 Whilst technique is important, there is so much more to Aikido than being able to throw or immobilize. For example, Jim Nicholls Sensei from Byron Bay Aikido club gives a wonderful lesson in verbal Aikido. There is no physical contact involved. The only obvious links between defender and aggressor are voice and body language. It is a subtle (and sometimes not so subtle) combination of tone, volume, expression and posture.

Of course, voice and body language are merely the outer forms. The inner form is the spirit. In other words, what is really driving the voice and the body’s posture as a self defense mechanism is a positive mind, self confidence and a strong extension of internal energy. Although invisible, there is a real connection made at this level.

As O Sensei said, “Your spirit is the true shield.”

Verbal Aikido employs all the same principles of Aikido but without the physical contact. This is very relevant to everyday life because not every action in this world requires a martial response. In fact very little does. Outside the dojo, we always have a choice of how we respond to people. For example, using Aikido terminology, we can choose:

Irimi or tenkan – enter or turn? Atemi or taijin – strike or retreat?

So while it is technique that is learnt inside the dojo, it is the underlying principles that are applied outside. Most of the time, these must be applied without any physical contact whatsoever.

3. Sanja Festival this weekend in Tokyo 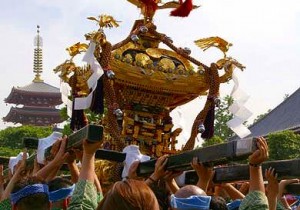 Sanja Matsuri (literally “Three Shrine Festival”), or Sanja Festival, is one of the three great Shinto festivals in Tokyo, along with the Kanda Matsuri and Sannō Matsuri. It is considered one of the wildest and largest. The festival is held in honor of Hinokuma Hamanari, Hinokuma Takenari and Hajino Nakatomo, the three men who established and founded Sensō-ji, an ancient Buddhist temple located in Asakusa, Taitō, Tokyo. Ity is Tokyo’s oldest temple.

Sanja Matsuri is held on the third weekend of every May at Asakusa Shrine. Its prominent parades revolve around three mikoshi (three portable shrines referenced in the festival’s name), as well as traditional music and dancing. Over the course of three days, the festival attracts 1.5 to 2 million locals and tourists every year.

Like many Japanese festivals, Sanja Matsuri is a religious celebration. It is a weekend-long Shinto festival that is dedicated to the kami (spirits) of three men. It is believed that two fishermen—brothers named Hinokuma Hamanari and Hinokuma Takenari—found a statuette of the Bodhisattva Kannon caught in a fishing net in the Sumida River on May 17, 628. The third man, a wealthy landlord named Hajino Nakatomo, heard about the discovery, approached the brothers and converted them to Buddhism. The three men then devoted their lives to the Buddhist faith and consecrated the statue in a small temple. This temple, now known as the Sensō-ji, currently houses the Kannon statue and is the oldest temple in Tokyo.

The Sanja Matsuri appears to have many forms that date back as early as the 7th century, as well as several names such as “Kannon Matsuri” and “Asakusa Matsuri”. Sanja Matsuri’s present day form was established during the Edo Period. In 1649, shogunate Tokugawa Iemitsu commissioned the construction of Asakusa Shrine, a Shinto shrine dedicated to the three kami. The existence of this shrine helped to solidify the festival’s importance as well as its current structure and organization

“Success is going from failure to failure without loss of enthusiasm.” Winston Churchill