It was a great day. Eleven of our members graded on Saturday. They all showed once again that there is no substitute for hard work and repetitive practice. 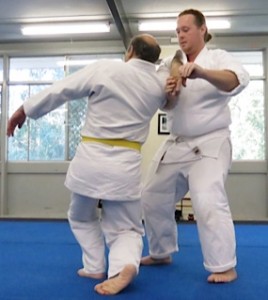 Jessica, Warwick and Catherine were wonderful. They all have a very good grasp of basic technique and showed some good footwork. There were some good early signs of Aikido understanding.

Even though Catherine was obviously very nervous before she started, she did a great job. One of the fundamentals of Aikido is relaxation. It also makes future gradings far less stressful.

Two of our more mature-age students, Rod and Peter have been training regularly since the day they started. Both have a wonderful attitude towards their training. Decades of upper body strength are fast disappearing from both of them. Week by week, month by month they become softer and more flowing with their technique. This was evident on Saturday as they moved much more freely. Both did a very good job with their demonstration techniques and , like most older blokes, were never in a rush.

With the mat to himself, Brenden was the centre of attention for his green belt demonstration. He was calm, cool and relaxed and his technique was soft and flowing. He didn’t rush and was in control from start to finish.

Brenden travels from Gatton every Saturday to train with us. he has done a remarkable job. Well done Brenden, welcome to the senior grades. 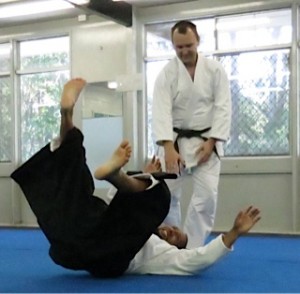 The future of our cub is looking as though it is in capable hands if these five first class hakama gradings are any indication. For Bartek, Rick, Matthew, Danny and Kylie, this was the penultimate demonstration ahead of their Shodan grading in a year’s time.

No matter how much practice is done, this grading is still a challenge on the day. Like all senior gradings, it is less of an instructor-set test and more a test of the self. These five club stalwarts all worked very hard to get here, and all are great examples for those coming behind them.

Every one of these dedicated students has had their own personal challenge to deal with. To their credit they all met their individual challenges and passed their own tests with flying colours. This was exemplified by the look of complete and utter relief on Kylie’s face as she knelt to bow out of her weapons kata.

For the onlookers it was a great spectacle to watch as they calmly guided their ukes around the mat. It just never ceases to be entertaining. It is also wonderful for instructors to see students emerge into the realm of calm effortless and confident Aikido.

It is just as gratifying to see the same students rolling effortlessly as Ukes, knowing they have skills for life that will stand them in good stead outside the dojo.

Congratulations to our five new 1st kyu students who will go on to meet their next challenge on Tuesday night of standing, moving and rolling in their new hakama. I wouldn’t miss that test. 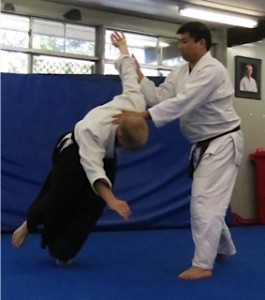 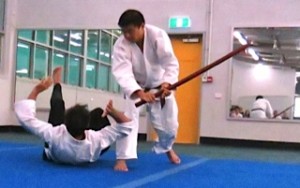 Thank you to all the other seniors who have helped out in recent weeks as assistant instructors and ukes as all 11 students prepared for their grading.

Here is an interesting article called ‘Modern Aikido: Moves and Meaning’, authored by Tom Koch and published on the Black Belt Magazine website.

“Forget the politics that have divided the founder Morihei Ueshiba’s aikido into a half-dozen communities, all calling themselves aikido. There are, in truth, only two aikido camps today: one mostly hidden, some say forgotten, and the other ascendant.

The first is a fearsome martial art cobbled together from older Japanese styles, resulting in a pattern of off-balancing entries, devastating throws and effective joint locks. That was the system Morihei Ueshiba, also known as O-Sensei, used in 70 matches when adepts from other styles came by to ask for a “lesson.”

The second is a noncombat-related practice in which aikido moves are taught to advance Morihei Ueshiba’s social philosophy, one in which effectiveness is at best secondary to goals of personal balance and communal harmony. That is hombu aikido today, the discipline that’s advanced by the founder’s grandson, Moriteru Ueshiba, the current head, or doshu, of the style. That doesn’t mean the aikido moves he teaches are ineffective, only that martial excellence is, for him, a secondary concern.” …

“If you can dream it, you can do it.” Walt Disney