Blog - Latest News
You are here: Home1 / Kamiza the seat of honour 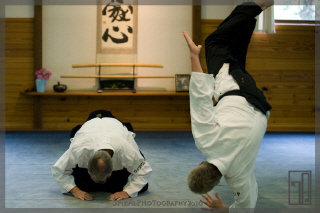 Just as we would seat an honoured guest at the head of the table in our house, we honour the heritage of Aikido and our lineage by creating a seat of honour inside our dojo. The Japanese word is Kamiza.

Its position inside the dojo reflects the notion that it is the highest or top seat in the house. It is located in the middle of our dojo, away from the door, away from extremes of weather; and in the Japanese feudal tradition removed from any likelihood of intrusion or attack.

A picture of the founder O Sensei Morihei Ueshiba is always displayed in the Kamiza of an Aikido dojo. In our dojo, as in every other Aikido dojo that follows the Yuishinkai style, of Master Koretoshi Maruyama, we also display the shin calligraphy. This original calligraphy was presented personally by Maruyama Sensei when our dojo first opened.

So what does this calligraphy represent? The characters for Yui-shin show that the Mind is at the core of existence. This way of thinking forms the heart of Eastern philosophy. Yuishin originates from the concept that, “All beings and phenomena are a transformation of the mind; there is no existence other than Mind itself.” (p.6 Aikido Yuishinkai Student handbook by Michael Williams Sensei, World Chief Instructor, Aikido Yuishinkai International)

Our Kamiza also includes the weapons of Aikido – the bokken, the Jo and the Tanto. These weapons have considerable historical significance and are intrinsic to the teaching of the art of Aikido.

So when we bow to Kamiza, we are paying our respects to our guests in the seat of honour!

Check out Michael Williams Sensei upcoming seminar and the date of our next Beginner’s Course at the Announcements board of http://www.griffithaikido.com