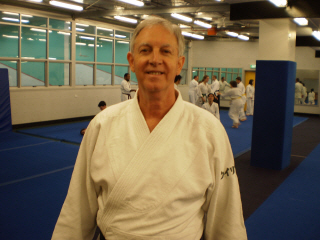 Sensei is Chief Instructor of Aikido Yuishinkai international. Australian Aikidoists are incredibly fortunate to have Williams Sensei residing in South east Queensland and soon to be living permanently to Northern NSW.

At Griffith Aikido Institute, we were very pleased to have Williams Sensei teach at our school once a week for most of 2010. To have such high caliber instruction and valuable insight over such a long period was truly engaging and inspiring for students of all levels.

This background on Michael Williams Sensei is an excerpt from Sensei’s own Aikido Yuishinkai Student Handbook.

“Michael Williams Sensei was first attracted to Aikido while visiting New Zealand in 1974, where he attended demonstrations by Koichi Tohei Sensei. He was a serious student of Yoga and Wing Chun Kung Fu at that time.

Returning to his homeland of South Africa, he began training with Jean Claude Delgueldre Sensei, Chief Instructor of Aikido in South Africa.

He immigrated to New Zealand in 1978 where he continued his training with the New Zealand Ki Society. He moved to Australia in 1981, where he founded Aikido Ki Society Australia and established his first dojo at Griffith University Brisbane.

In 1985, he was appointed Chief Instructor of Australia by Koichi Tohei Sensei.

At that time, Maruyama Sensei was the Chief Instructor of Ki Society International and taught many seminars in Australia and New Zealand. He was an inspirational teacher to one and all, and during this time Williams Sensei and Maruyama Sensei formed a special bond.

In 1989, Williams Sensei relocated to Byron Bay in Northern NSW where he built Goshinkan Dojo. Bordered by forest reserve, ‘Goshinkan’ provides a serene haven for all Australian Aikidoists to train together. It was officially opened by Master Koretoshi Maruyama, President of Ki Society International, in May 1991.

Williams Sensei resigned from Ki Society International in December 2001 after a 28-year association with the organisation. At the same time he also resigned from Aikido Ki Society Australia, the group he founded in 1981.

After re-establishing contact with Maruyama Sensei, Williams Sensei was requested to act as a facilitator to disseminate Aikido Yuishinkai throughout the world.

Footnote: In December 2009 Master Koretoshi Maruyama honoured Williams Sensei once more by awarding him with the 10th Dan.

Be sure to attend the Michael Williams Sensei seminar at Goshinkan Dojo on 26th & 27th March 2011. Mark your calendar!