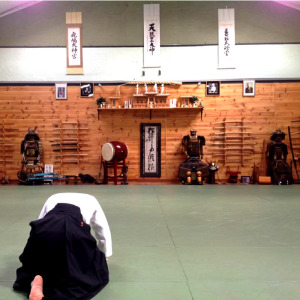 Man is most humbled through a culture that has a respect for all things.

There are little eccentricities when training in a dojo. It can be rather daunting to the initial beginner when already trying to just gather the basics of technique, that you then realise you are thrown into as well, a strange dialogue of etiquette. It may seem strange but this culture is just as pivotal as the techniques in learning the art of Aikido.

From the moment you go to step into the dojo, you are bowing to almost everything. And then to top it off, when you think you have finally mastered the courtesies, as your partner bows to you, if they are the ultra-enthusiastic type, they will then greet you in a bunch of syllables spoken in rapid succession. If they’re really good, another different set of syllables is spoken again at the end of training with this person. Regardless, even if you avoid, perhaps awkwardly, this strange conversing, you must then face the muttering of these alien syllables at the start and end of class…

The training space is an odd environment. Once you enter the room, you set foot into a strange quasi-culturally foreign place. This is further reinforced by the placement of ornamental stands, images and even calligraphy on the walls. It isn’t Japan but it’s not like the everyday outside world either. The training space is a strange hybrid of cultural ties – held together by the very people active in that space at that time.

So what does it all mean? Although seeming benign at times, rituals or practices give a space significance. It’s our psychological way of helping us change our frame of mind. For many, after a long gruelling day at work or dealing with the stresses of life, this is a way to automatically separate our problems of the outside world from the dojo. For most, the dojo can be a psychological oasis. Aikido is a Japanese martial art. With this comes the most apparent practices of Japanese culture including language and gestures, but moreover even spiritual aspects such as Shintoism.

In general, the Japanese culture expresses a lot of thanks, courtesy and gratitude to not only people (past and present) but objects and spaces as well. This ties into Shintoism’s concept that all things have spirits. This is manifested as having respect for all things. Moreover though, there is also a permeation of other cultural practices in the art, bearing traces of Buddhism, Doaism and even Confucianism that stretch from a line of Japanese martial tradition (Budo). As you train, these will become more apparent.