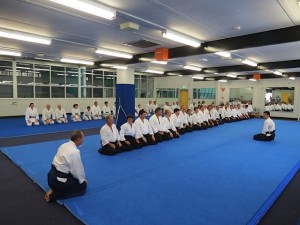 Those of us that have trained with Chicko Sensei before were eager to see if others would be as impressed with Chicko Sensei’s approach to Aikido as we have been. He is welcoming, unassuming and extremely generous in sharing his take on what he terms “Aiki Principles”.

He had a record number of participants up as his uke at some point, but if you missed him personally you could also grab any one of his students that graciously made the journey to GAI as well. I know many of our Yuishinkai members got a bit of a shock when they were lined up against a Fudoshin “white” belt.

The morning session started with just under fifty people, and we got a few more for the afternoon session so we were just about capacity. People came from Byron Bay, Bald Hills, Bayside, Noosa and even interstate and the atmosphere was very positive from the start to finish. The theme was to explore O’Sensei’s “expression” of Aiki in his latter years. I would encourage you to get hold of any old footage of O’Sensei and reflect on Saturday’s sessions, you will see many similarities.

We had two of the three Australian Yuishinkai Nanadan’s in the room as well as many other highly ranked participants which also added to the excitement. Chicko Sensei started and finished on a similar note, emphasizing the feeling of gathering and welcoming in Uke when he attacks with your breath and your whole being, joining uke as one, and then redirecting the power to a peaceful conclusion. 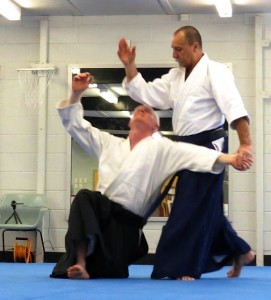 Always natural, always calm, Sensei embodies these attributes, it looks so simple but attempts by many of us fall so short as we are yet at that part of the mountain.

As usual Gavin, Shane and other Fudoshin members took the brunt of Sensei’s demonstrations, their Ukemi is a tribute to the school as Sensei had little hesitation wielding Bokken, Jo or many other forms of Atemi tantalizingly close to these Uke’s vital organs or face.

They tend to give more contact and for a longer time than we are typically used to but if you were watching closely that is because any slackening of intent provides opportunity for nage to initiate the ultimate end.

The sessions revolved around concepts rather than specific techniques, emphasis on small specific natural movements to get nage into a position where many technique’s can / could then evolve. For me this is the next level, a freedom of expression that is not bound by the rigors of specific waza. Similar philosophies are expressed by our own Maruyama Sensei for higher grades.

Uke is already defeated as soon as he attacks, if you can get the universal concepts ingrained into your mind and body, and then unify them. 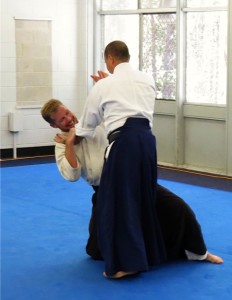 It is always assumed with Chicko Sensei you have a basic understanding of technique and he does not care much what variety that may be, it is the “expression” of the waza, as he puts it that matters.

Also for me another aspect of a session with Chicko Sensei that brings a smile is his insistence he cannot really teach us anything, more so it is for us to discover. He does, however, help point you in the right direction.

I know no one left the dojo in any doubt that Aikido is truly a journey of a lifetime and we were guided by Sensei on his view of Aiki and the expressions of these principles. I also know most would have left thinking “what just happened”.

From experience it takes a few days for the information to settle in but I can assure you what did happen, was we were treated to an insight on Aikido that few have the privilege to take part in. So reflect on it, try to utilize it in your daily life and your own Aikido and also look forward to the next time we can get Chicko Sensei down to Griffith Aikido for another seminar.

Another perspective of the seminar, this time from Sensei Craig Boyd.

Griffith Aikido were fortunate in Hosting Sensei Chicko Xerri – and what an amazing day everyone had exploring concepts of Aiki that in Yuishinkai are probably not explored as deeply or to such effect as what we all saw at the seminar.

Sensei explained that he looks at the expression of the final development of O Sensei’s journey. This is where the meeting (the “Ai” in Aiki) is about “breathing them in and welcoming them into you universe” through the use of Kokyu (breath and timing) the other aspect was don’t collide, so there was always a movement or change in position that accompanied the breath. This takes the Uke’s centre, or mind if done correctly, which then makes technique much easier. Sensei repeatedly demonstrated this throughout the day emphasising – small movement off line, absorbing the energy, stand your ground , and technique will just “happen” …..that simple!……..well I wish it was, as it certainly looked easy but to put these simple concepts into practice was another thing. 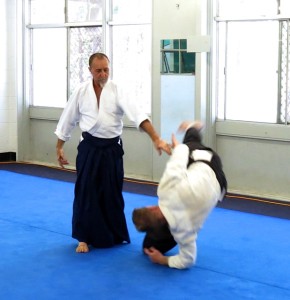 Sensei would demonstrate a slightly different new position/movement from a different attack , from there he would explore and demonstrate technique options that can be done from the new position, after this he would send us on our ways to pair up and explore the core concept. So this was how we spent most of the day; observing and then going and trying for ourselves to discover more of the great Aiki mysteries. (there were a couple of video camera’s about so hopefully we will all be able to revisit all the small details that were demonstrated).

A very nice parallel was how sensei explained Ukemi , how to take it, and its importance on learning to protect yourself. This was also addressed by Maruyama Sensei at the last Byron seminar – but Chicko sensei reiterated the importance for uke to protect themselves, be aware of what nage was doing and why when we roll or fall down it is a good thing! This was aptly demonstrated with a few examples of “potential broken noses” and also very nicely explained/demonstrated using a bokken and the potential to be cut, with Uke protecting themselves from these different threats. He also mentioned that training is as much to train Uke awareness and sensitivity in potentially dangerous situations again also spoken about by Maruyama Sensei.

Ultimately it was great just for everyone to have a look at what is possible in their Aiki journey, where technique is forgotten in place of just great positioning. I’ve heard that “Aikido technique is not Aikido. It just teaches you Aikido”, but I’ve always had a hard time with this as the question lingers of “if I remove technique, what does Aikido look like?” After Seeing Chicko Sensei perform Aikido I now have a glimpse and a better understanding of this. It would be safe to assume that every one saw something unique and brilliant so hopefully it was a worthwhile experience where some new ideas were seen and some old ones confirmed. Finally a big thank you to the organisers, Sensei Chicko & his Deshi, the Yuishinkai Aikidoka, and all our other visitors for putting aside styles, making the trip and just getting together to explore Aiki!