There are many ways to celebrate Australia Day. We at Everton Hills decided that a grading was the way to go. On reflection, it was probably a risky proposition given the long weekend and the bad weather. Notwithstanding, we had a good turnout. Big thanks to all those who braved the elements to support their Aikido mates as ukes and in other roles, including those who came from other dojos.
Thom Hansen Sensei and Rod Nixon-Smith Sensei (Everton Hills Dojo Cho) comprised the grading panel. Thom Sensei guest instructed at the Dojo a number of times in 2012 and it’s always nice to have him drop by once again and give us his support and insights. 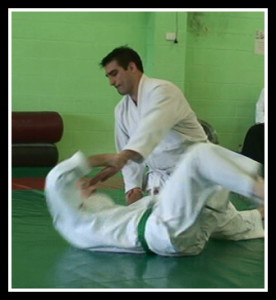 Pete started with us last year and is one of those students you just love getting through the door. He is a committed student, always working on getting his technique right. I don’t think I can recall a Saturday morning class where I haven’t walked in and not seen Pete working on his ukemi or some other aspect of his practice. This Saturday was no different. Being first up on the mat at a grading day is never easy. In Aikido we make it doubly hard by insisting the least experience amongst us go first. Pete performed this task admirably and did a fine job. As to be expected, Pete’s grading was focussed on getting the principles right. What I particularly liked about Pete’s technique is that he stood up straight throughout and remained centred. This is sometimes a challenge for all of us, but when you stand a good 30cm taller than everyone else, like Pete does, this can be even more challenging. Well done mate and we all look forward to working on your 5th kyu with you. 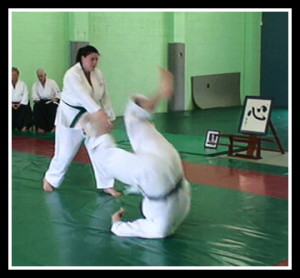 Susan is one of those people you just like having on the mat. She is dedicated, upbeat, enthusiastic and always happy to help out. Susan has been training for this grading over the last couple months like an Olympic athelete, both on the mat and at home. All these efforts really showed on the day. How did Craig Sensei put it – “it’s like watching Wonder Woman out there”. Susan’s grading was characterised by plenty of zenponages (projections) and technique variety. As everyone knows, 2nd kyu is a long grading with a lot of taninzugake. One of the best parts of Susan’s grading was that she maintained a consistent pace, didn’t get flustered and was calm throughout. Her weapons kata was precise and similarly well-paced. Congratulations Susan on an excellent grading.

Gary has been with Everton Hills for quite a while now. He’s a dedicated student who gives his all at every class. Gary focuses a lot on making his Aikido “real”, which is something I really respect. Gary’s grading was dynamic and fast paced. His uke’s worked hard for their money (pizza in this case) and their ukemi was at times really tested. There was also a good variety of techniques covering a broad spectrum of the syllabus. I also liked the way Gary used the entirety of the mat to his advantage and really put on a show for the crowd. Well done Gary – fantastic job. 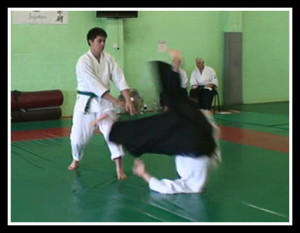 Zac was last up for the day and provided a fitting finale for our grading day. Relaxed and consistent paced execution was the name of the game and Zac’s techniques really benefitted from it. While I’m not sure if Zac broke into a sweat, I can vouch that his ukes did. One of the notable things about having Zac on the mat is that he is always eager to experiment with new techniques in his taninzugake. It may have been his grading, but today was no different. Earlier in the class Rod Sensei decided to teach an old-school “Hammer of Thor” technique. Needless to say, first technique in Zac’s taninzugake was a “Hammer of Thor” technique on roids. Looked great on video, although I must say I would have enjoyed it more if it had been someone else’s head other than mine! Zac’s taninzugake was both dynamic and varied. His weapons kata was also excellent. Congratulations Zac on a well deserved 2nd kyu.

A big thank you to all those who worked behind the scenes to make the morning a success. David and Michelle – the pizzas really hit the mark. Thanks also to Craig Sensei for recording the event. I should have the DVD’s for those who graded ready in the next 2 weeks. Finally a round of applause for all the ukes – without you the grading could not have happened at all. Congratulations to all those who graded.

All the best,
-Ian

The Everton round up!Seminar Roundup 2/2/13
Scroll to top