Mansfield-Mt Gravatt dojo will be closed on Anzac Day (Wed. 25th April). See you all on Wednesday 2nd May

A cherry blossom is the flower of the cherry trees known as sakura. It heralds the arrival of spring. Sadly, the flowers last only a few days and then they fall from the trees and are swept away with the wind.

As part of the nightly weather forecasts, the Japanese Meteorological Agency tracks the sakura zensen (cherry-blossom front) as it moves northward up the archipelago with the approach of warmer weather.

Hanami (cherry blossom viewing) has been a Japanese custom since the 7th century when the aristocrats enjoyed looking at sakura so beautiful it inspired poetry. Sakura is a symbol of Japan.

It is said that there are over four hundred varieties of cherry trees in Japan. The most popular kind of sakura which can be viewed everywhere in Japan is somei-yoshino (Yedoensis). It is interesting to note that Japanese cherry trees do not yield fruits like other cherry trees.

7th kyu (white belt with one yellow stripe) – the beginner student learns the basic movements of Aikido, including up, down and circular movements. The relationship between the ‘bokken’ and the hand art of Aikido is introduced. The concept of internal energy and Ki extension is also introduced with exercises such as ‘unbendable arm’. Defensive falling is taught. At beginner level, all movements seem unnatural at first, and would only be complicated by the addition of hand-use and footwork. 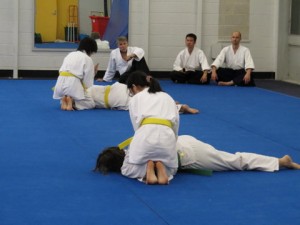 6th kyu (white belt with two yellow stripes) – strikes are introduced causing the fundamental concept of ‘getting off the line of attack’ to gain relevance. The ‘ura’ (open) and ‘omote’ (hidden) body positions are also introduced as part of basic technique. The importance of ‘waza’, commonly mistaken for warm up exercises, is explained as the foundation of all Aikido movement. Techniques are taught where the student begins to learn some basic steps and use of the hands.

5th kyu (yellow belt) – grabs move from wrist to shoulder and strikes continue. The techniques are performed a little closer together (shorter ‘ma-ai’ distance) and the concept of taking uke’s centre is practiced. It is here that students should begin to use their centre and internal power to move their partner, but it is common to revert to the lifelong habit of using arms and upper body. Confidence emerges as the initial confusion of these strange Aikido movement lifts. 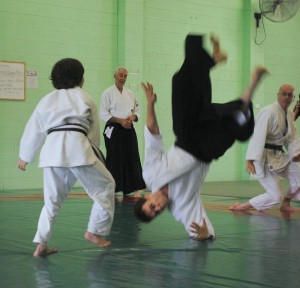 3rd kyu (green belt) – this is the beginning of the senior ranks. The student should have a good understanding of basic techniques practiced at static level. They should also be able to use their centre (tanden) well and demonstrate good Ki extension. This is the level where students practice technique under movement and begin to develop individually. Even though becoming ‘soft and smooth’ is encouraged from the start, this is where it usually happens (but not before some students go through a ‘wrestling with the upper body’ stage). Students should now have a thorough understanding of dojo etiquette and know how to fold a hakama – the black Japanese pants worn from 1st kyu and above. From this point the syllabus moves to free movement with more ‘taninzugake’ practice.

2nd kyu (brown belt) – it is at this point where students must begin taking responsibility for their own learning. It is a time of realisation that student’s role extends beyond that of being a student under instruction. Even though the Sempai – Kohai relationship exists at every level within the dojo, it is now that the 2nd kyu student should be acutely aware of their responsibilities in the dojo and helping those coming up behind. There are no entirely new techniques taught but there are many variations. This is the level where weapons are introduced into the formal grading demonstration for the first time. However, it is a mistake to leave it this long to learn weapons kata and defence against weapons (e.g. Bokken Tori). Familiarization with Bokken and Jo movements should start much earlier because there is a direct relationship between the use of weapons and the development of Aikido’s hand art. Being competent with weapons of Aikido generally means being competent in the hand art.

1st Kyu (brown belt with hakama) – this is the beginning of the ‘taninzugake’ gradings, which characterize all higher grading demonstrations. This means that the grading is performed under movement, and under the pressure of attack from start to finish. There are no new techniques at this level, although the student has by this time, learned many variations and techniques outside the grading syllabus. The biggest challenge at this level is to stay calm under pressure and still have calmness, presence and energy to perform the weapon kata at the end. For the following 12 months the student continues to train and improve and prepares for Shodan. Part of that preparation is to wear the hakama and become used to it during all aspects of practice.

Shodan (black belt) – this is 1st Dan level which means first step. After several years of training, the student has not reached the end, but only the beginning. He or she has achieved the first step in a lifetime of learning Aikido, after which continued practice and teaching will increase the student’s level of understanding through to Nidan and Sandan levels. Shodan is the start of real learning; the journey of self-development that can only begin with a thorough understanding of the basics. Students invited to grade to Shodan are expected to uphold all of the traditions of Aikido Yuishinkai with humility, pride and courage. They should aspire to be wonderful role models in the dojo and able representatives of our Founder, Master Koretoshi Maruyama.

“The mediocre teachers talk; the good teachers explain; the superior teachers demonstrate; and the great teachers inspire” from the Masters of Aikido