If you have any world or Brisbane Aikido contribution for the Shukan News (story, photograph, video), please send it via email to gary@garyweigh.com

Your last chance this month to learn the subtle art of Aikido with Griffith Aikido Institute begins 6.30 pm on Thursday evening (9th) at Nathan Dojo.

Join the June 2011 Beginner’s Course. To book your place, go to our payments page page and pay by Paypal

2. An Interview with Maruyama Sensei

Maruyama Sensei provides some fascinating insight into his time with O Sensei and his development of Aikido Yuishinkai. Sensei also shares his thoughts on weapons, the importance of the centerline and the healing aspects of our art.

To the question, “What do you think is the most valuable gift that a teacher can give to a student?” Sensei replies “Don’t fight. Use Ki. Don’t resist. Take ukemi.”

Read the full Interview with Maruyama Sensei. (Scroll down past the Aikido Yuishikai Motto)

3. A Sunday karate grading in Ipswich 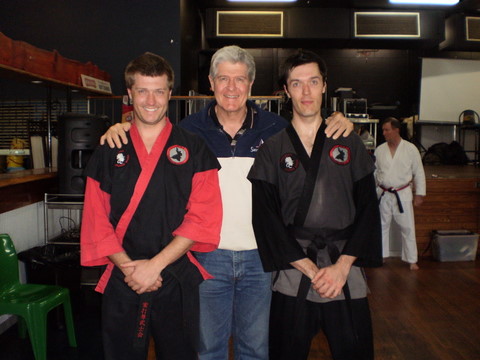 On Sunday I was a spectator and a proud Dad as my son Greg graded to Shodan-ho in Anderson Bushi Kai karate. It is fascinating to watch other arts and I am pleased to be able to look past the kicking and punching to see the underlying principles that drive every martial art.

I was particularly interested in the Buki breathing of their Sanchin kata. They stand tall, always emphasising a straight centreline. During a long inhale, all the chakras are aligned as Ki energy is drawn from the universe. At the same time, the feet make very solid ‘white toes’ contact with the earth, also drawing up energy.

All the energy drawn into the body during inhalation is then pushed down and exhaled hard as it is directed through the arm into the hand, focused into the two striking knuckles and propelled explosively through the target. That was the yang! Their yin was the Tensho kata which followed; all soft and flowing forms with just a little yang as the palms pushed outwards. Great to watch!

In the self defence section, the defences to grabs were very reminiscent of our Aikido techniques. The difference was mainly the inclusion of explosive strikes with hands, feet, knees and elbows which we tend to downplay.

The grading concluded with 10 x 2-3 minute rounds of sparring. Although quite physical, it was obviously a source of great enjoyment for participants and spectators alike. As much as technique was important, this was all about focus, self control, endurance and good old fashioned heart! The instructors mingled between four pairs of combatants urging them on; through the tiredness; through the pain; through the injuries; and most of all urging them to never, ever give up!

All were exhausted as they knelt to receive and put on their hard earned black belts. All were elated as they received recognition and congratulations from their instructors. I love martial arts. In addition to their obvious self defence benefits, the underlying principles are wonderful metaphors for life.

O Sensei
“Always keep your mind as bright and clear as the vast sky, the great ocean, and the highest peak, empty of all thoughts. Always keep your body filled with light and heat. Fill yourself with the power of wisdom and enlightenment.” O Sensei Morehei Ueshiba

The BokkenThe Jo
Scroll to top