Blog - Latest News
You are here: Home1 / The hakama, its origins and who wears it 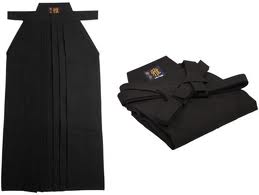 In a little over a week, we will have five additional hakama wearers in our dojo. So it is timely to look at the origins of hakama and who wears it.

The hakama is the skirt-like pants worn in some schools of Japanese based martial arts. It is worn in most Aikido schools as well as in some Jujitsu, Judo and Karate schools. It is a traditional piece of samurai clothing. It is worn over the standard gi which was originally regarded as underclothing.

The hakama were originally meant to protect a horseman’s legs from brush, etc., — not unlike a cowboy’s leather ‘chaps’. Leather was hard to come by in Japan, so heavy cloth was used instead. After the samurai, as a class, dismounted and became more like foot-soldiers, they persisted in wearing horseman’s garb because it set them apart and made them easily identifiable.

There were different styles of hakama. The type worn by today’s martial artists – with “legs” – is called a joba hakama, (roughly translated as ‘horse riding thing into which one steps’). Another type resembles a tube skirt with no legs.

The tube skirt type of hakama also came in a very long version. It was worn on visits to the Shogun or Emperor. It was about 12-15 feet long and was folded repeatedly and placed between the feet and posterior of the visitor. This necessitated shikko (“knee walking”) as their only approach for their audience, and made it extremely unlikely that they could hide a weapon or rise quickly to make an attack.

The hakama has seven deep pleats, two on the back and five on the front. The pleats are said to represent the seven virtues of bushido, considered essential to the samurai way:

Although they appear balanced, the arrangement of the front pleats, (three to the right, two to the left) is asymmetrical, and as such is an example of asymmetry in Japanese aesthetics.

In many schools, only the black belts and / or senior students wear hakama; in other schools everyone does. In some instances women are permitted to start wearing it earlier than men. This is generally done out of consideration for the modesty of women, bearing in mind that a gi was originally underclothing.

In Yuishinkai Aikido (our school), students with the rank of 1st kyu and above wear hakama.

It is said by his original students that O Sensei was rather emphatic that everyone wore the hakama, but then he came from a time not too far distant from a culture of wearing hakama as standard formal wear.

“Most of the students were too poor to buy a hakama but it was required to wear one. If they couldn’t get one from an older relative, they would take the cover off an old futon, cut it, dye it, and give it to a seamstress to make into a hakama.