Blog - Latest News
You are here: Home1 / The thrill and excitement of Sumo 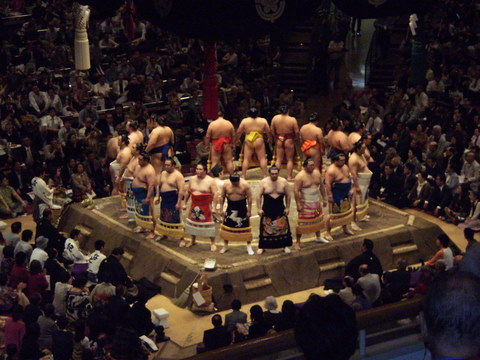 When you visit Japan, the event that should be on the top of your to-do list is Sumo wrestling. The current Sumo stadium is the Kokugikan in the Ryogoku district. It is 2-3 minutes walk from Ryogoku Station on the JR Sobu Line and can be seen from the station platform.

Sumo is an ancient sport steeped heavily in Shinto tradition. Most of the Shinto that can be seen occurs symbolically. The sand that covers the clay of the ring (dohyo) is itself a symbol of purity in the Shinto religion. The canopy above the ring (yakata) is made in the style of the roof of a Shinto shrine.

The four tassels on each corner of the canopy represent the four seasons, the white one as autumn, black as winter, green as spring and red as summer. The purple bunting around the roof symbolizes the drifting of the clouds and the rotation of the seasons. Even the referee (gyoji) resembles a Shinto priest in traditional robe.

Even though very little time is actually spent grappling the atmosphere inside the stadium is electric. Rikishi spend most of their time performing pre-bout ceremonies steeped in Shinto tradition. Once the actual bouts begin, the two rikishi spend several minutes before their match lifting their legs high in the air and stomping them down, a practice said to scare away any demons.

They also throw several handfuls of salt into the ring, which is said to purify the ring. Many rikishi will also sprinkle salt around their bodies as a means of protecting them from injury.

The object of Sumo is to force the opponent out of the (dohyo) or to make any part of his body (excepting the soles of the feet) touch the surface. A referee and several judges watch each match and call the winner.

The bouts are very brief, averaging only a few seconds, although some matchups can go on for two or three minutes.

Like any other social group in Japan, there are strict rules and traditions that are observed throughout the sport. The combatants cannot pull hair, gouge eyes, or strike with a closed fist. Therefore injuries are rare inside the ring however the dohyo is raised a few feet above the floor of the stadium and rikishi often tumble hard out of the dohyo and over the edge.

Pushing, tripping, slapping and various body throws are commonly seen in Sumo. Sometimes rikishi slap each other in the face, trying to break the concentration and force the opponent to make a poor move.

Much of Sumo wrestling is a mental battle. Rikishi will stare at each other to try and gain the advantage before the actual physical contact. Often the bout is won before the first move is even made.